The Farmland Access Research Project is a community-based participatory research project which aims to contribute to the understanding of and to providing solutions for sustainable, community-based farmland management for local food production in British Columbia. The research project is currently based out of the Faculty of Land and Food Systems and the Centre for Sustainable Food Systems at UBC and is working in partnership with the Community Farms Program and Young Agrarian program of FarmFolk CityFolk. The research project and the development of this website has been funded by the Real Estate Foundation of BC.

The Community Farms program emerged from a collaboration between The Land Conservancy of BC (TLC) and FarmFolk CityFolk. TLC is a non-profit, charitable organization established in 1997 with a natural conservation mandate.  In 2006 TLC expanded its mandate to include the preservation of farmland for farming. The development and implementation of TLC’s farmland program was a collaborative effort with FarmFolk CityFolk and led to the development of the Community Farms Program. TLC’s agricultural program involved the direct acquisition and management of farmland through various tools as well as research and development of resources for farmland trust work in the province.

TLC developed serious financial troubles and as they struggle to restructure under creditor protection, they have refocused their activities around their original mandate of natural conservation and the agricultural program has been dropped.  TLC still holds and manages several agricultural properties and covenants however the organization will not be taking on the holding or management of any new agricultural land.  Many people put significant time and effort into developing the agricultural programming and resources at TLC, and while it is absolutely necessary to recognize and learn from the financial mismanagement of TLC, it is also important to recognize and build from the positive contributions of those individuals involved in farmland trust work through the TLC between 2006-2012. TLC was the only trust organization in BC that had an agricultural mandate and with the program cut there is no longer a suitable trust organization in the province to contribute to agricultural land protection and management for active farming.

The Community Farms Program and associated Community Farms Network remain in operation under the sole direction of FarmFolk CityFolk. The goals of the CFP are to support the establishment of alternative forms of land ownership, to contribute to the conservation of agricultural and food-producing lands, and to advance sustainable, community-led models of farmland ownership, access, governance and production. The CFP does this through the development and provisions of resources for community farmers, through the provision of support to forming community farms, and through the creation of networking opportunities.

The CFN and Roundtable get togethers were formed to bring community farmers together to explore common ground and mutual challenges, build links with new and existing community farms, and to share inspiration, information, and ideas for advancing sustainable models of community farming. The 6th Community Farms Roundtable was held in the winter of 2014 at O.U.R. Ecovillage bringing together about 35 people with many being new farmers to the Roundtables and some who have been involved since the beginning. To learn more about the CFP and the resources offered please visit their website.

Young Agrarians formed in 2011 as a partnership with FarmFolk CityFolk in response to the declining numbers of young farmers in Canada, the heightened challenges faced by new farm entrants, and the overall decline of farming in Canada generally. YA’s mission is to “to connect young farmers and grow more sustainable/ecological food growers across Canada.”  Young Agrarians were a project partner for the survey research on beginning and young farmers and are an important community stakeholder as they take on a growing role in developing and delivering resources including land access resources to beginning and young farmers in the province.  To learn more about Young Agrarians and their programs please visit their website.

The research project began in 2008 as a partnership between FarmFolk CityFolk, The Land Conservancy of British Columbia and Dr. Hannah Wittman who was then a researcher at SFU’s Centre for Sustainable Community Development and Department of Sociology. The initial phases of the research contributed to the development of the Community Farms Program and the Community Farms Network and Dr. Wittman has remained involved as a researcher and advisory member to the Community Farms Program and Network. In 2009 a research report documenting the operations of community farms, the motivations for establishment, the models being used, and challenges and benefits was undertaken by Dr. Wittman with support from FarmFolk CityFolk and TLC. This report was the first documentation of community farm models and exploration of the concept of community-based land reform applied to agriculture in British Columbia.

In 2011 Dr. Wittman began a three year multi-site global ethnography study to examine unconventional land tenure, community-based land reform and agrarian citizenship in Brazil, Guatemala and British Columbia. The British Columbia portion of the research was a furthering of the research being done in collaboration with the Community Farms Program on alternative land access and tenure in BC. In 2012 Jessica Dennis joined the research project as a Master’s Student working with Dr. Wittman with a research focus on the BC portion of the overarching research project. The current research was expanded to include an examination of emerging beginning and young farmer networks in British Columbia and an integration of beginning and young farmer challenges and needs with the alternative land tenure and access research. Community-based farmland management requires both a sustained and accessible agricultural land base as well as continuing generations of farmers to farm on the land.

Survey, interview, ethnographic and secondary source research was conducted between 2012 – 2014 and is now in the process of being analyzed. Preliminary results were shared in a presentation to community stakeholders available on our research page and reports and papers will be made available on the research page as they become available.

Farmland, farmers, farmers on the land, and profitability are foundational to a sustainable local food system. 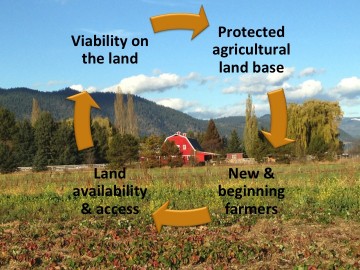